On 5 April, Airwheel two-wheeled scooter showed on New Zealand entertainment programme called WhatNow. WhatNow is a most influential and famed entertainment programme in New Zealand. In New Zealand, there are numerous spectators loyal to WhatNow. Two young hosts were given the challenge to learn to ride Airwheel’s two-wheeled scooter. Faced with the amazing challenge, the hosts were very excited and impatient to show their skill in riding it. 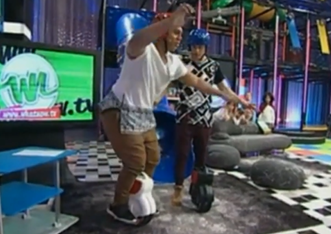 It is obvious that the two were very smart with the excellent ability to maintain balance. They spent only minutes on riding the two-wheeled scooter. When able to scoot on the two-wheeled scooter at will, they went rapturous. They found the riding experience rather awesome. Enjoying the sense of achievement, they almost were carried away.

In the entertainment programme, the model the two hosts rode was Q-series. Based on the X-series, Airwheel released a two-wheeled scooter, Q-series. Q-series inherits the exterior design from X-series. However, Airwheel gave a ground-breaking tweak to the wheel structure. The single-wheeled structure was transformed into the two-wheeled one. The two-wheeled structure contributes to keeping balance and seems more user-friendly. Therefore, Q-series becomes the favourite of tyros. Everyone can make it. Do not be scared away by it. 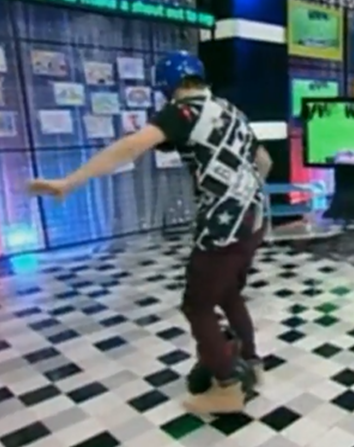 The ease of use and the user-friendly design are Airwheel’s core notions about products. Through years’ painstaking efforts and sufficient experiences, Airwheel works nearly to perfection. Just on this account, Airwheel’s two-wheeled scooters are very prevalent across the globe. The youngsters and tech enthusiasts are fond of them, regarding them as the must-have.